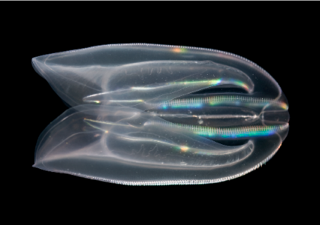 
Mnemiopsis leidyi is a ctenophore native to the coastal waters of the western Atlantic Ocean. A number of studies on Mnemiopsis have led to a better understanding of many key biological processes, including regeneration and axial patterning, and these studies have contributed to the emergence of Mnemiopsis as an important model for evolutionary and developmental studies.


Genomic sequencing of non-bilaterian animal phyla and their closest non-metazoan relatives has provided invaluable insight into the molecular innovations that have fueled the outbreak of diversity and complexity in the early evolution of animals. From a phylogenetic standpoint, the relationship of ctenophores to other animals has been a source of long-standing debate. Recent phylogenomic studies based on analyses of many genes from many taxa have produced conflicting results, leading to the realization that a complete ctenophore genome sequence would be needed to satisfactorily resolve the phylogenetic position of this phylum and its relationship to other early branching metazoans.


To fill the void regarding the availability of high-quality, genome-scale sequence data in this part of the evolutionary tree, we have sequenced, assembled, annotated, and performed a preliminary analysis on the 150 megabase genome of Mnemiopsis. This sequencing effort has produced the first set of whole-genome sequencing data on any ctenophore species, and is amongst the first wave of animal genomes to be sequenced de novo using solely next-generation sequencing technologies.


The Mnemiopsis Genome Project Portal (MGP Portal) is intended as a resource for investigators from a number of scientific communities to obtain genomic information on Mnemiopsis through an intuitive and easy-to-use interface. The scope of data available through this Web site goes well-beyond the sequence data available through GenBank, providing annotations and other key biological information not available elsewhere. It is hoped that the availability of these data will allow investigators to advance their own research projects aimed at understanding phylogenetic diversity and the evolution of proteins that play a fundamental role in metazoan development.